Users may register new Molecules into CDD Vault either manually, one-at-a-time, through the interface or by using the Data Import wizard. Whichever mechanism is used, the chemical properties described below are automatically calculated by CDD Vault for every chemical structure registered.

Molecular weight
The average molecular mass calculated from the standard atomic weights, averaged over all isotopes weighted by their natural abundance.

H-bond donors and H-bond acceptors
The number of hydrogen bond donors/acceptors in this molecule.

Lipinski Rule of Five
A rule of thumb to evaluate whether a chemical molecule would likely be an orally active drug in humans. The rule is not predictive, but it is a widely adopted, useful guideline. The rule is composed of four criteria, all based on numbers that are multiples of the number five:

log S
The aqueous solubility at pH 7.4. The solubility of a molecule is the concentration in equilibrium with the solid phase that is dissolved into the solution. The implementation is based on the following publication.
ESOL: Estimating Aqueous Solubility Directly from Molecular Structure
John S. Delaney, J. Chem. Inf. Comput. Sci., 2004, 44, 1000 - 1005.
The parameters for ESOL were refitted using multiple linear regression.

pKa
The implementation is based on work of Lu et al. (DOI: 10.1021/acs.jcim.9b00498) using experimental data from Mansouri et al. (DOI: 10.1186/s13321-019-0384-1). The value reported is the strongest pKa, either basic or acidic. When the pH of the solution is equal with pKa, the concentrations of dissociated and undissociated species are equal. Learn more…

Topological Polar Surface Area
The topological polar surface area (TPSA) is formed by polar atoms of a molecule. It is a descriptor that shows good correlation with passive molecular transport through membranes, and so it is used to estimate drug transport properties. Estimation of the TPSA is based on the method given in Ertl et al.

Exact mass
The monoisotopic mass calculated from the weights of the most abundant natural isotopes of the elements.

Heavy atom count
The total number of atoms in the molecule excluding hydrogen.

Rotatable bonds
The number of rotatable bonds reflects molecular flexibility and has been shown to correlate with the oral bio-availability of a drug. Unsaturated bonds, and single bonds connected to hydrogens or terminal atoms, single bonds of amides, sulfonamides and those connecting two hindered aromatic rings (having at least three ortho substituents) are considered non-rotatable.

Formula
The chemical formula of the molecule according to the Hill system: the number of carbon atoms is indicated first, the number of hydrogen atoms next (including deuterium and tritium when using D and T symbols), and then the number of all other chemical elements subsequently, in alphabetical order.

Composition
The elemental composition (CHNO Analysis) given in weight percentage (w/w %) calculated from the atomic masses.

CDD Vault calculates the CNS MPO score using the same linear transformational functions and inflection points described in Wager et al. (2010) mentioned above, but uses physicochemical properties provided by the CDD Chemistry tools. There are six properties that are used as inputs, and they contribute to the score as follows: 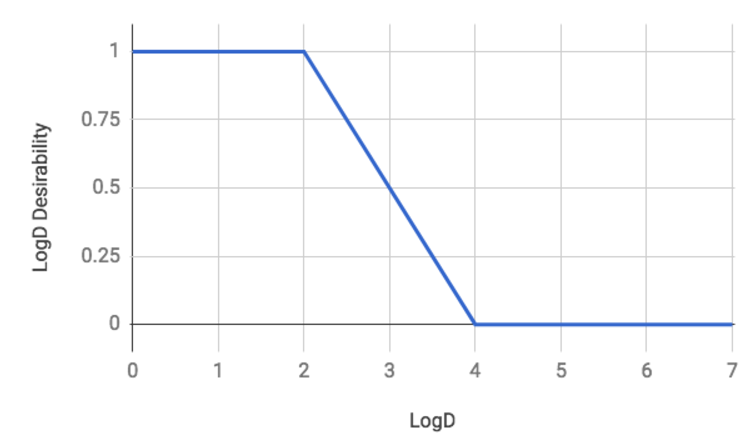 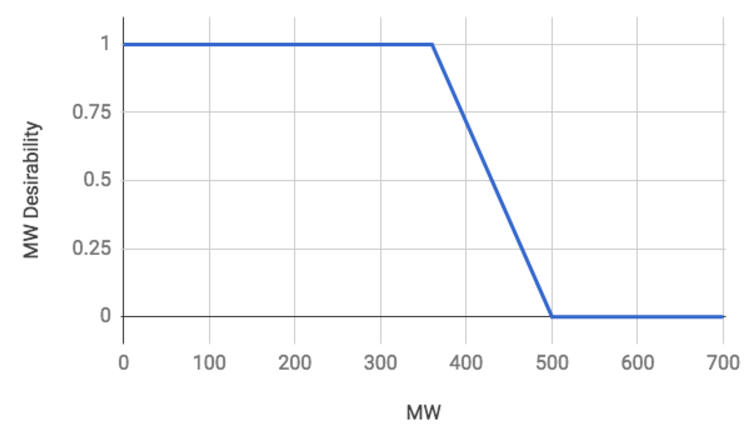 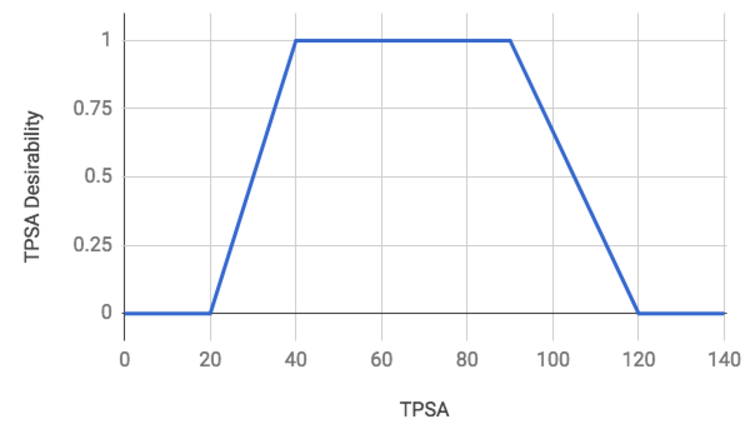 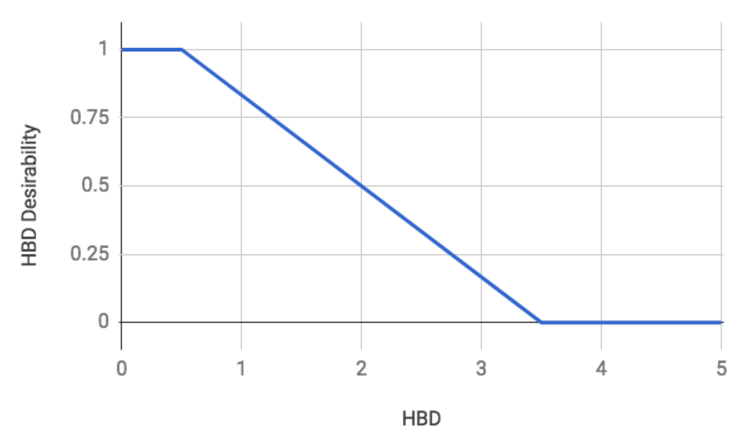 CDD Vault automates the generation of chemical properties based on structures.