Users may register new Molecules into CDD Vault either manually, one-at-a-time, through the interface or by using the Data Import wizard. Whichever mechanism is used, a set of chemical properties are automatically calculated by CDD Vault for every chemical structure (small molecule) registered. Here are details on the Log D Model used in CDD Vault.

The logD model was developed using the same computational approach described in Gedeck et al. (2017) for logP. The model predicts logD with a median absolute error of 0.38, a mean absolute error of 0.5, and a root mean squared error of 0.7. This performance is comparable to results reported in the literature for other methods.

The approach used in the development of the model allows us to incorporate additional experimental data without having access to structural information (see Gedeck et al., 2017). One limitation of the current implementation is that for structures with tautomeric groups, predictions can vary based on how tautomers are drawn. While we incorporate some normalization of tautomers, the implementation is not complete. We are currently exploring approaches to develop tautomer independent fingerprints. We expect this to improve our model in the future.

After cleanup and removing duplicate values, the combined dataset has 5,133 structures for the logD model. Each chemical structure is preprocessed as follows:

Descriptors
A variety of fingerprints implemented in RDKit were explored:

While the performance metrics are a useful measure to judge the overall quality of the model, it is useful to look at the distribution of the errors. 62% of all predictions are within 0.5 log unit, 89% within 1 log unit. Only 1.3% have predictions greater than 2. The following figure shows predicted versus experimental logD values. 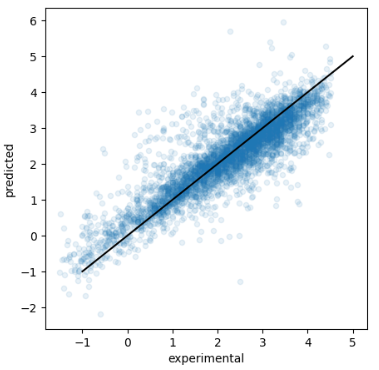 The performance of the model is similar to results reported in the literature. Tetko and Poda (2004) evaluated the performance of several methods on two Pfizer internal logD datasets. ACD Labs LogD achieved MAE of 0.69 and 0.97 and an RMSE of 0.99 and 1.32. Pallas PrologD had a slightly worse performance; MAE 1.29 and 1.06, RMSE 1.52 and 1.41. The ALOGPS software gave MAE of 1.09 and 1.17, RMSE 1.33 and 1.17. This last result was improved by retraining the ALOGPSS model using parts of the internal dataset. After training, MAE was 0.45 and 0.48, RMSE 0.68 and 0.69. Bruneau and McElroy (2006) used a Bayesian regularized neural network which was trained using internal data from AstraZeneca. They report an RMSE value of 0.63. Schroeter et al. (2007) achieved an RMSE value of 0.66 using an internal dataset from Bayer Schering Pharma. Li Fu et al. (2020) reported RMSE values around 0.5 using several non-linear modeling methods. While this seems like a significant improvement over the previous results, it needs to be noted that the RMSE values dropped considerably when applied to an external test set. In these cases, a linear regression model like we used in our model, had comparable performance to the non-linear models. This is an indication that the non-linear models were overfitting the dataset.

All in all, the performance of our logD model is comparable to other models.

CDD Vault automates the generation of chemical properties based on structures.