In either case, you want to update existing runs with the missing/new data.

Unlike compound batch level data, you cannot overwrite existing data in your readout definitions via the file (bulk) import. To change ("overwrite") existing values, you would have to manually edit the data fields within your Protocol;  in the case of updating a run with missing data, you can do this via bulk import but with a slight caveat:

Option 1: You want to add the missing readout definition and make these addition obvious when looking at the data in your table. The result would look something like this, with the new readout in a separate row (Run view): 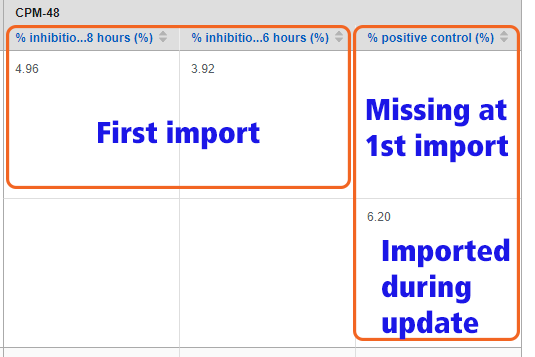 To obtain this, after uploading the file and choosing the option “Add Readouts (protocol data) only”, map your IDs as usual, select the existing Run (Date) and map only the missing data column!.  Should you map all columns, you will end up with unwanted replicates!

Note, that calculations (e.g. an average) will not be affected by this entry having "two rows".

Option 2: The more likely scenario: You want the new data integrated seamlessly, displaying only one row in the search view: 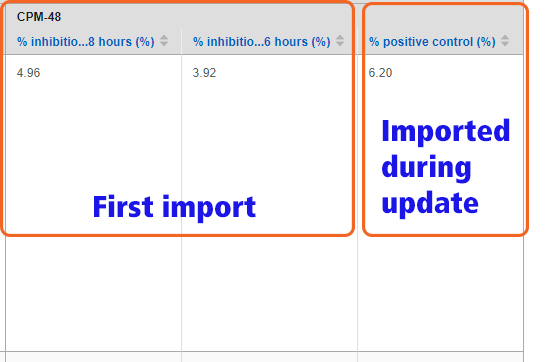 This is currently not possible via "updating" the run per se: The runs will need to be deleted entirely and then re-imported  again with the missing data. See here  how to delete a run. If you registered data with plates, you can, but don't have to, delete those imported plates. In other words, this is optional and you save yourself some steps by not deleting the plates from the initial (to be corrected) run. See here on how to delete a plate.